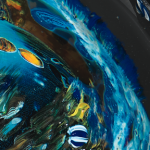 Early use of the microscope was plagued by several issues, especially the artisanal and imprecise nature of lens grinding. There was no scientific means of producing and evaluating lenses until Ernst Abbe (1840-1906) developed them in the 1870s. Thus, lens grinding was frequently a trial-and-error process. Before the early 19th century, lenses often created blurry regions or color halos around the specimens being viewed. The first photomicrographs weren’t taken until the early 19th century, which meant that early scientists had to draw what they were seeing through microscopes by hand. The challenges faced by the first microscopists are so legion, the title of a 2011 article by Francisc Szekely in the journal, Parergon, even begins, “Unreliable Observers, Flawed Instruments”!

The Rakow Library is fortunate to own one of the most famous books of early microscopy, Micrographia (1667), by Robert Hooke (1636-1703). This book (bibl 97629) is especially celebrated for its full-page, beautiful illustrations of objects Hooke examined under his microscope. These included linen and silk fabric, plant seeds and cross-sections, fungus, and striking images of insects like fleas, ants, head lice, and silverfish. Illustration of 'blue mould' from Hooke's Micrographia. Image by the Rakow LIbrary.

Hooke also describes the many challenges he faced in his microscopic investigations, including one that caught me by surprise. Given my understanding of early microscopy, I expected all Hooke’s stories would be about making and grinding glass for his lenses. Instead, I turned a page and read about Hooke’s frustration when trying to view ants. The creatures would run off the stage and out of view or struggled so much when pinned in place by pincers that Hooke couldn’t get a good look at them. He tried killing some, but they shriveled quickly, making them (naturally) not life-like. What was a microscopist to do?

Having insnar’d [ensnared] several of these [ants] into a small Box, I made choice of the tallest grown among them, and separating it from the rest, I gave it a Gill [approximately half a cup] of Brandy, or Spirit of Wine, which after a while e’en [even] knock’d him down dead drunk, so that he became moveless [motionless], though at first putting [the ant] in [the brandy] he struggled for a pretty while very much, till at last, certain bubbles issuing out of its mouth, it ceased to move; this ( because I had before found them quickly to recover again, if they were taken out presently [right away] ), I suffered to lye [lie] about an hour in the Spirit ; and after I had taken it out, and put its body and legs into a natural posture, remained moveless [motionless] about an hour;…

Passage from Micrographia, page 204. Image by the Rakow Research Library.

What Hooke is basically saying is that he figured out that putting his ant specimens in brandy for an hour knocked them out long enough for them to be examined under his microscope! Therefore, some of our first and best-known microscopic images of ants are actually of drunk ants. Illustration of a (presumably drunk) ant as seen under a microscope in Micrographia, page 203. Image by the Rakow Research Library.

This amusing anecdote highlights one of the wonderful things about studying the history of glass and glassmaking at the Rakow Research Library: frequently you also learn about other subjects, such as the history of science or the economics of an industry. And, every once in a while, you come across a tidbit like this that makes for great conversation at your next holiday dinner party.