Joanna Manousis is originally from Shrewsbury, in Shropshire, England. Where she’s from, she says, is important to what she makes. She recalls as a child visiting the town market where her grandmother sold buttons and lace. It could have been amongst the rows of glass jars filled with these treasures where Manousis first became interested in glass. As an artist even from a young age, Manousis studied fine art, classical civilization and biology in school, all the while painting and drawing. Of her varied artistic interests, she discloses that her reasoning for continuing to work in glass is simply: “because it’s a challenge.”

Manousis earned a B.F.A. in Glass from The University of Wolverhampton, England, and came to the U.S. to study at Alfred University in 2008. She received her M.F.A. in Sculpture in 2010, and has since been continuing her work in blown and kiln-cast sculpture.

“My work,” Manousis states, “captures and animates liminal moments, revealing a world in which objects, beings and places are interconnected and in flux. I re-appropriate objects that exist in the world as a device to lure and engage a universal audience.” 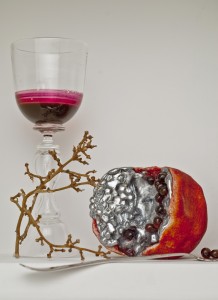 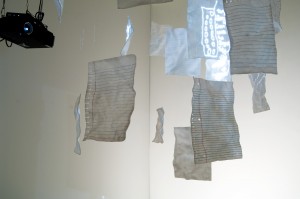 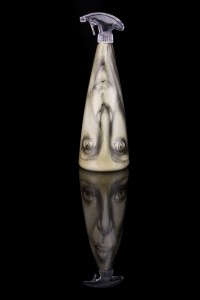 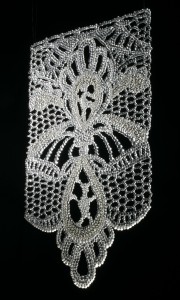 Her Lace series (2007) draws from childhood memories and the contradiction of fragility and strength. The Self-Contained Spray series (2007-08), cast glass bottles, sandblasted and portrait painted, is a comment on the 1950s kitsch nostalgia in today’s society. 2010’s Life Lists, included in New Glass Review 32, is a series of thin hand-painted pâte de verre sheets, hung to move and catch the light of projected written to-do lists. Inverted Vanitas (2010) incorporates a pâte de verre skin encompassing the mirrored internal flesh of a pomegranate, complete with glass seeds.

During her October 2012 residency at The Corning Museum of Glass, Manousis created works for her upcoming shows: Old and New, a solo show at The Philadelphia Art Alliance running now through January 2012, and New Visions at the Wexler Gallery in 2013. At work in The Studio’s hot shop.

This work brought a unique occupant to the artist-in-residence studio at the Museum in the form of a large taxidermied peacock. Manousis was on a bus in Seattle when she first saw a peacock in a store window.  “I did a double take – it looked so real that it might fly off its perch.” She knew that she wanted to incorporate a peacock into her work, but the concept took a few years to formulate. As part of the Fertile Groundseries, flameworked and cast crystal succulent cacti are incorporated to explore the questions of “What is real?” and “What is artifice?” as the viewer encounters “mere reflections of what the living entities once were.”

Manousis uses glass to induce reflection—both physically and metaphorically. Her other major work involved casting large scale mason jars. Work on the jars began the first day of her residency, as the objects would take just about two weeks to anneal. The interior of each jar had an individual mold, the negative space of an object sitting atop the exterior of the jar, in this case, a magpie. “Human, chimps, and magpie are the only animals to recognize their own reflection,” said Manousis. After casting the jar, the glass is acid polished for clarity, and then the interior form is given a reflective mirrored surface, in effect creating a 3D reflection of the external viewer.

When asked if she feels as though she has reached a certain level as an artist, Manousis replied, “I don’t see there being a pinnacle, because you never know what’s in the future.”