The opening of a new hot shop is a grand occasion and last week’s ceremony for the new Hot Glass Show Innovations Stage was a fitting celebration of the long-standing tradition of glassmaking here at the Museum. To transition from the old Hot Glass Show stage to the new light-filled Innovations Stage, all of the glassmakers who have worked at the Museum over the years were invited to join the procession. Led by the Finger Lakes Pipe Band and the Veterans of the Foreign War Color Guard, gaffers George Kennard and Don Pierce carried gobs of glass from the old furnaces to the furnaces in the new hot shop. The Innovations Stage is a unique presentation space, with state-of-the-art all-electric equipment. It’s more energy efficient than the natural gas powered furnaces. 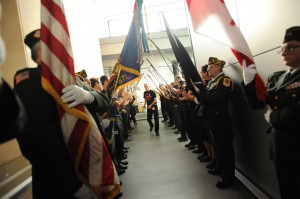 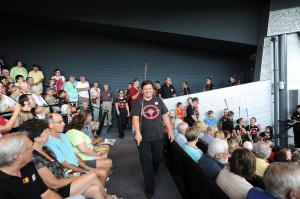 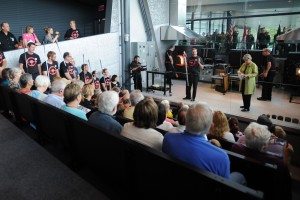 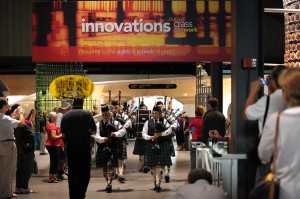 Steve Gibbs, hot glass programs manager, was the master of ceremonies, carrying a mace with elaborate filigree work and the red CMoG symbol, made especially for the event. The new theater was immediately filled to its 165-seat capacity, and after executive director Karol Wight dedicated the new hot shop, the glass demo began.

The first object to be made on the stage was what’s known as a witch’s ball. According to folklore, the witch’s ball originated in 18th century Europe where it would be hung in windows to keep away evil spirits. As the tradition made its way to glasshouses in America, it was said that witches and other spirits wishing harm would see the glass ball and be attracted to the shiny, sparkly stringers inside. The spirits would get tangled in the strings inside the ball and not be able to escape and cause any harm.

The Rakow Research Library’s holdings cover every topic related to glass, and their files helped shed more light on the traditions surrounding witch’s balls. Raymond Barlow’s A Guide to Sandwich Glass: Witch Balls, Containers and Toys, says that the term “witch’s ball” could be a derivation of the term “watch ball,” small glass balls filled with herbs, or in some instances, mixtures of herbs, urine and sticks meant to ward off evil spirits. Multiple sources also note that witches supposedly fear round shapes, and would stay away.

There are also records of the different colors used. The earliest witch’s balls were clear, then colored frit (small bits of glass) was added, first blue and white, and then pink. Later examples, in the 1820s according to Barlow, show swirls and loops similar to decoration found on glass marbles. If red, white and blue were used, the object is known as a militia ball. These were popular during the Civil War when glassmakers who were in the army would hang them from their muskets for holiday parades. Witch’s balls of a single color were usually meant for hanging in a barn.

In the 20th century, the witch’s ball became part of a category of glass objects made by factory glassmakers during spare time at the furnace, known as whimsies. Joyce Blake’s Glasshouse Whimsies is a good starting place to learn more about these canes, chains, eggs, paperweights and witch’s balls.

The Michigan Glass Guild Newsletter from March 1988 notes that a witch’s ball can be found in many glass schools, where it is a tradition for each class to make one for the studio. “Not only the piece brings good luck, but the collaboration of the glass workers is as positive as any Good Luck Charm can be.” (Barbara Yearce, “Witchballs.” Michigan Glass Guild Newsletter, no. 21, March 1988, p. 3.)

At the Hot Glass Show Innovations Stage opening, each glassblower added a bit of glass to the piece. The end result is an elaborate be-winged clear glass ball that is truly unique. The witch’s ball made on the new Innovations Stage

“It’s really about recognizing the collaborative spirit of glassmaking,” said Eric Meek, Hot Glass Show supervisor, “everyone has contributed their skills on the Hot Glass Show stage throughout the years, and we wanted a way to honor that and continue that tradition on the new stage.”