“His liberal but firm attitude and his comments made him a natural authority, not only in his main field of study, the history of glass, but also in the fine and decorative arts, the museum world, his broader family, and far beyond.” says Dedo von Kerssenbrock-Krosick, the Museum’s former curator of European glass and now head of the Glasmuseum Hentrich, Museum Kunstpalast, in Dusseldorf.

Von Saldern, who was born in Potsdam on July 28, 1923, began his employment at the Corning Museum as a cataloguer on January 2, 1954. Glass was a completely new subject to Axel when he arrived in Corning. The Museum was then housed in a tiny portion of the space that it occupies today, and both the staff and the collection were small. But it was a growing institution, and it quickly began to be recognized internationally, not least among archaeologists.

Corning allowed for pioneering research and prominent acquisitions, and Axel made ample use of both. One of his first activities at the Museum seems to have been assisting with the organization of the exhibition The Story of American Pressed Glass of the Lacy Period, 1825–1850 (1954). In 1956, Axel traveled to Cologne with the backing of a considerable budget for the acquisition of glass at the Lempertz auction house. Because of his interest in ancient glass, he was assigned to be the Museum’s contact person for the collector Ray Winfield Smith, and he eventually chose a significant part of Smith’s holdings to be added to the Corning collection. 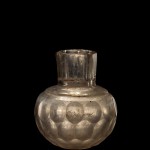 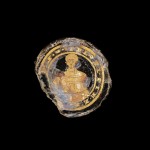 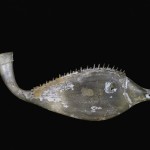 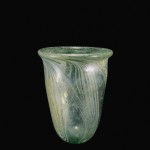 Axel started to travel to the Near East in 1967, and he studied and published the glass finds from Gordion and Sardis. He also helped to found the Journal of Glass Studies, which he co-edited, and he contributed an extensive paper on Gordion to the initial volume of that publication in 1959. Cut glass of the Achaemenian, Sasanian, and Islamic periods became his core specialty. But the Corning Museum’s collecting activities encompassed the entire field of glass art, and so did Axel’s studies. His most prominent accomplishment for Corning was his formidable book on German enameled glass, which, as a survey of this subject, remains unsurpassed.

Following a position at the Brooklyn Museum of Art from 1961 to 1966, he returned to Germany, where he assumed the positions of curator of sculpture and decorative arts and vice director at the Kunstmuseum (today, the Museum Kunstpalast) in Düsseldorf where, under Axel’s curatorship, glass became an independent department of the museum.

In 1971, von Saldern was appointed director of the Museum für Kunst und Gewerbe in Hamburg. There were 17 exhibitions in 1973 alone, and von Saldern’s major shows—including Tutankhamen (1981), the Bugattis (1983), gold and silver from the Kremlin (1986), and Lalique (1988)—are among the most ambitious and successful that the museum has ever presented.

In 1988, von Saldern retired, and soon thereafter he and his wife Maria relocated to Starnberg, near Munich. One year before his retirement, he had become president of the Association Internationale pour l’Histoire du Verre (AIHV), and he had served for decades as head of Section V of the German Society for Glass Technology.

Says von Kerssenbrock-Krosigk, “It was only after his retirement that von Saldern found time to complete his magnum opus, an outstanding and far too little known book on ancient glass.This massive volume of 708 pages contains 64 plates, about 1,500 footnotes, and everything that von Saldern knew about glass from early Mesopotamia to the fall of the Roman Empire. Following Anton Kisa’s Das Glas im Altertume (Leipzig: Verlag von Karl W. Hiersemann, 1908) and Donald B. Harden’s “Ancient Glass” (published in The Archaeological Journal in 1969, 1970, and 1972), this was the third attempt to summarize the entire knowledge of ancient glass in one volume.”

Following the publication of his final book, von Saldern gradually retired from research and art history. But he remained incredibly alert, informed, and open-minded until the very last minute of his life. He died, suddenly and unexpectedly, in his garden in Starnberg, on June 2, 2012—but not before he had confirmed his place in the pantheon of the most eminent scholars of the history of glass.