Steuben Glass, under the direction of both Frederick Carder and Arthur Houghton, accepted special orders from customers. The Rakow Research Library has 13 watercolors of a blue cut to clear tableware set that was created by Steuben founding director Frederick Carder for a customer at the Milwaukee firm, George Watts & Son. The designs are documented through correspondence between Howard Watts at the high-end store and Steuben, dated from May 22, 1934 to October 31, 1934. The designs are not dated, but the ware mentioned in the correspondence matches the designs.

Watts and his customer requested various items for the set, often with measurements, including:

In one letter, Watts wrote: “Our client should also have a sherry glass as well as the other items ordered. She has not admitted it yet, but it might be well for you to send us a drawing of what you would suggest for this use in the pattern, for we think with a little proper salesmanship we might get that item added to the order.”

There is an additional design for a tapered sherry glass. 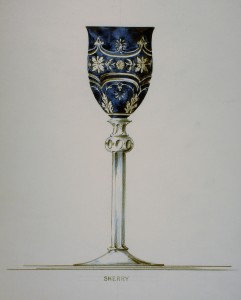 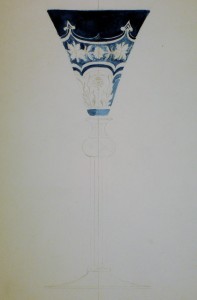 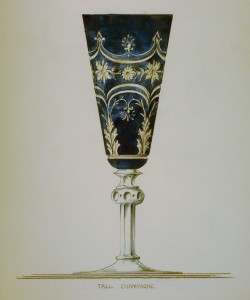 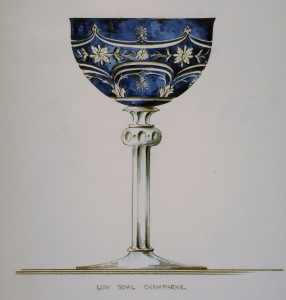 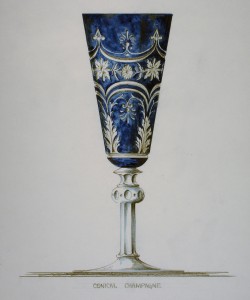 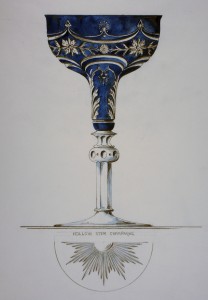 On May 22, Howard Watts wrote that the “tall champs” will best serve the customer’s purpose. However, there were three other designs for champagne glasses, including a hollow stem champagne, a low bowl champagne, and a conical champagne. To meet the request for a center bowl, Steuben sent a drawing in June 1934 with an asking price of $175. Watts responded: “The price of the bowl was not such a shock to us but it was obvious that the price for the making of it would make the price absolutely prohibitive.” Perhaps a drawing for a second bowl was sent; we only know that the customer did order a bowl on July 2, 1934. We have only the one drawing of a bowl – and don’t know if it is the center bowl or a requested oval flower bowl. On July 2, 1934, the customer ordered a pair of compotes; she preferred that they be oval, rather than round. In May, Howard Watts wrote that the customer was interested in a pair of candelabra. “She wants nothing in the ordinary conventional style, but would like an arrangement whereby it would have a much more unusual arrangement. Her idea is to have each branch of the candelabra different in height so that she will not have a set mass of light at one level.” When Steuben sent a drawing in June, Howard Watts replied: “we are sorry we cannot develop the same enthusiasm as we did for the stemware, for the obvious reasons that the price was such that we were afraid the customer might have a stroke, although she is a sport about paying large prices; also, the candelabra was much more massive than we had suggested and too large for the table and the size of the room.” Watts sent Steuben a drawing and photograph of an imported candelabrum with three arms/lights, at different heights, and a cased-glass receptacle. In a letter of July 2, 1934, Watts ordered a pair of candelabra – but we don’t know the design. 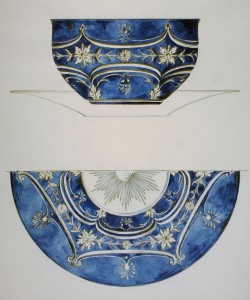 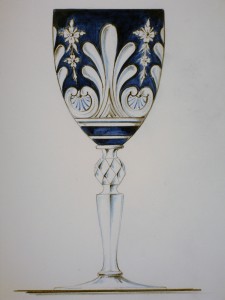 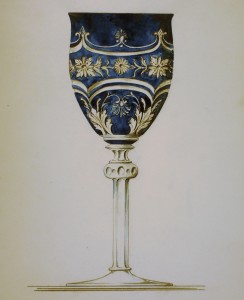 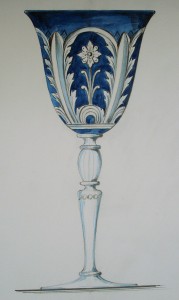 On October 31, 1934, Bob Leavy, manager at Steuben, sent an interoffice memo to Carder. Watts had written to Steuben, asking that Carder send a letter to his firm about the special blue cased stemware set stating that Carder had designed it entirely himself (“designed to order”) and that the design “is an exclusive thing for the customer alone.” Watts says that going as far as possible along those lines would make the customer feel even greater pride in the beauty of the set, and happier in their purchase, and that it would be of lasting help to his firm.

We have a copy of the letter that Carder wrote to Watts, incorporating Watts’ requests, which concludes with “I feel that she has some of the best work I have done in this line.”

If you are interested in exploring the various facets of Carder, the Rakow Research Library is a great place to begin your research. We can provide bibliographies, and offer interlibrary loans of some of the books, periodical articles, and often microfiche of Steuben catalogs.

The Juliette K. and Leonard S. Rakow Research Library is open daily from 9 a.m. to 5 p.m.